...they're taking it anyway.

So... it's been quite a skeeter summer, deep in the heart (or bowels?) of Red Hook. Hell, all of Brooklyn, it seems. Why, we have all asked, are there so many frigging monsters pricking into any and every bit of exposed skin (and some creepin' up under some folks' clothes, wink wink nudge nudge)? Well... Some guy called Gersh found out: 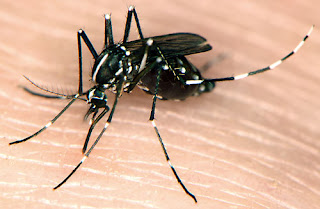 Buzz off!
By Gersh Kuntzman
The Brooklyn Paper

People from Greenpoint to Bay Ridge have been complaining about “being eaten alive” by mosquitos this summer — but it’s not just the normal seasonal whining: the population of a particularly insidious blood-sucker has doubled this summer alone.

And that cute tyke below is one of the prime victims!

Sure, he’s my son, but he could be your son. In fact, he is your son. And daughter. And yourself.

After getting sporadic, unconfirmed and altogether unscientific reports that there has been a huge uptick in skeeters this summer, I called the Health Department to find out if my neighbors and I were just going mad or if we really become human blood banks.

Confirmed: We are insect food.

The Asian tiger mosquito — a species once entirely unknown to America — is showing up in record numbers in Health Department testing sites all over the borough.

And unlike normal, relatively slow and less aggressive breeds, this ornery beast is ruining barbecues, turning restaurant gardens into feedlots (for the bug, that is) and, yes, biting my son in so many places that he looks like a pincushion.

“It has been a good summer for mosquito [breeding], weather-wise,” said Dr. Edgar Butts, the Health Department’s assistant commissioner for vetinary and pest control.

“The bad news is that the Asian tiger mosquito has doubled in population. And this is a tenacious mosquito that will really go after you,” Butts said.

“The good news is that it’s not a good vector for West Nile Virus,” he added, putting in his department’s standard plea for people to report all standing water in the city’s ongoing effort to cut down on West Nile–carrying bugs.

I agree that disease-prevention is one good reason to call 311 whenever you see a water-filled tire. And of course, I’m concerned that my son’s only memories of his first summer on earth will be that of repetitive scratching and vague recollections of waking up screaming in pain.
Brooklyn Bridge Realty

But there’s yet another reason to bemoan the fertility of the Asian tiger mosquito: They’re even biting our beloved celebrities!

“They’re with us — especially in Brooklyn, where I live,” Park Slope resident and international screen siren Maggie Gyllenhaal told David Letterman last month, during a weird digression about mosquitos. “They’re insaaaane in Brooklyn.”

Yes, my friends, if you’ve been bitten by a mosquito this summer, you may have a blood link to Maggie Gyllenhaal.

But the “Dark Knight” star isn’t the only one who’s hearing a giant sucking sound coming from her leg.

“Everyone is complaining,” said Carlos Elias, the co-owner of the new restaurant Aji on Ninth Street in Park Slope. The restaurant is heavily dependent on its two outdoor seating areas (they’re lovely, by the way), which he says are not getting the kind of traffic they could be getting.

Posters on Park Slope Parents, the ubiquitous neighborhood Web site, have been trading secrets about which repellents work best (full disclosure: I have put so much DEET on my arms that I set off smoke detectors in neighboring houses) and whether the “mosquito season” will be over by September so a friend can go ahead and plan an outdoor birthday party.

Not sufficiently horrified? Well, let me tell you a few choice words about our “friend,” Aedes albopictus. Originally spotted in Texas in 1985, this pernicious little devil now has a range that spreads from Mexico to Greenpoint, though his main stomping grounds seem to be the Bible Belt (for now).

According to the Centers for Disease Control (and these people should know; they’re based in Atlanta!), the tiger mosquito is “an aggressive day-biter and is most active from 10 am to 3 pm.”

And their eggs “can survive very cold winters.”

Here’s hoping that we go into a mini–Ice Age this December. Otherwise, these mosquitos are coming back in full force next spring and carrying off my son as their love slave.
Gersh Kuntzman is the Editor of The Brooklyn Paper. E-mail Gersh at kuntzman@brooklynpaper.com

I coulda done that

So... apparently some hoidy toid of the Times took it upon himself to declare the need for rules to walking.

Of course, ego steps up and makes me wanna declare *I said it first!* (MY Rules of Walking) and maybe even add *And I said it better!* Mind you, this guy did add the annoyance of dog leashes and texters... but other than that, he missed so much.

So, in declaration of my wonder and ego, and to even go so far as to update with more declarations on how to appropriately pass thru the world without the imposition of your existence on others, I give you:

THE Rules of Walking:

Ok... for years, I've endured the ignorance, but now I can't take no more! This city needs to set some ground rules, and they need to be posted on every subway train, platforms, and listed on those stupid TV monitors at the tops of the subway entrances. We're a city of 8 million, and then some, with all the tourist coming and going. Let's work together people!

It's not difficult people. We just have to THINK. Common sense! But, since some people are less equipped with such sense than others, I'll spell it out for you:

Walk in the City like you would drive anywhere in America!

1. WALK TO THE RIGHT.
You're in America!
There's no need for millions of people to constantly dance with others they clearly aren't interested in dancing with. And, being a girl who can't dance, and seeing as Murphy's Law always gives me some dipshit to dance with - I think this is one rule that should definitely be enforced. I won't inflict my moves on anyone if everyone just walks to the right!

2. YIELD.
When coming out of a store, don't just walk right out into the side walk where there's already people moving to and fro. Come on! You wouldn't just drive out in the middle of an intersection or merge onto the interstate without looking and yielding.
Also, when exiting stores... What causes a person to walk out onto the sidewalk and just stop? Does the brightness of the sun or the falling of the rain or the moon in the sky surprise you and cause you to be like a deer in headlights? Don't do that. There's a whole building right behind you. If you want to step out of the store and stop, step out and to the right or left and stop next to the building. You wouldn't just drive out in the middle of an intersection and decide there which way you want to go.

3. NO SUDDEN STOPS.
The only time there can really be a valid excuse is if a person drops something. If you suddenly realize you're going the wrong way, a friend of yours tells you something shocking, something or someone catches your attention, you forget something and need to turn around - don't just stop right there!

4. LOOK BEHIND YOU BEFORE TURNING OR STOPPING.
For all of the above actions, particularly in number 3 - the least you can do is look behind you and see if your impending actions will disrupt the motion of another. Simple as that!

5. WALK IN A STRAIGHT LINE.
I ain't cop, but if I was and I saw some jerk swerving and veering, I'd pull him over and see if he'd been drinking. (Actually, I wouldn't cuz I just don't care enough. But the point is...) When walking, try and make it a straight line. Stay on your path, and out of others'!

6. DON'T STOP AT THE TOP OF THE SUBWAY STAIRS.
I always end up finding myself walking up the stairs behind one of these people. You get to the top and just stop and stand there. Yeah, sure you may be trying to get your bearings - but you can do that if you just step to the side (again, next to a building is a great spot!), and figure what you wanna do then.

7. IT'S CALLED A SIDEWALK FOR A REASON.
Move move move!!! Don't just stand there talking with people, figuring out where you want to go or where you are, or just look up gazing at the buildings. Do all that out of the way of the walk way.

8. SLOWER PACERS, WALK TO RIGHT.
On the interstate, the rule is - if you're going to drive slower, stay in the right lane so others can pass you on the left. This can apply with walking. The busier people can move around you, and you're less likely to have a collision with a stopped person standing to the side. (Like a stalled car on the side of the road.)

9. RALLIES DON'T TAKE UP THE WHOLE ROAD.
Nearly everyone has experienced a motorcycle rally. It can be a little thrill to see them cruise by, when you're just wandering about. But if you're stuck in your car waiting for the police escort to allow them to pass, it can be a bit annoying. This being said - come on groups! Let's not all take up the sidewalk. Share! If there is more than two of you, let's try staggering a bit so you leave plenty of walk space for the rest of us.

10. WALK AT YOUR OWN RISK.
While New Yorkers have been pigeon holed to be not-so-nice, it's bull shit! We are a very nice people - so long as you're not in our way. It's not that we are all about ourselves. Most of the time, especially during the work day, if we're out and about, we're moving form Point A to Point B and have to get there quickly. If you follow the above rules, it helps us out greatly! (And keeps us a nice people.)

It'd be nice if you would stop doing what you're doing cuz it's giving me an ache and I don't understand why it's at all necessary cuz it ain't gunna do anybody any good and is just gunna make it harder and take longer to get back to the norm that we all know and enjoy so well.

Spike Lee ain't got nuttin' on these people:

Gotta gotta see.
Posted by All Is On at 1:26 PM No comments:

Darby's dead!!! But his new movie comes out today

So many people are asking for it. I'm ready to give them what they want. The good, the bad and the... Oh you have no idea how much I agree with you and what you want is equal to what you deserve. If I could give every single one of you what you're wanting... oh the karma that I would have.

I stepped into the wind of the waterside
And waited for the shiver to subside
Walking in its direction
Looking forward
Giving no wonder or thought
Of the moment
Nor the coming
Just giving step by step to myself
Breathing in
Breathing out
The salinity resuscitating
Posted by All Is On at 3:42 PM No comments: