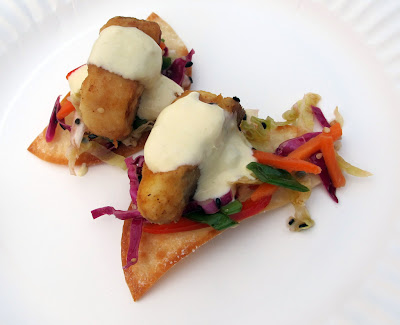 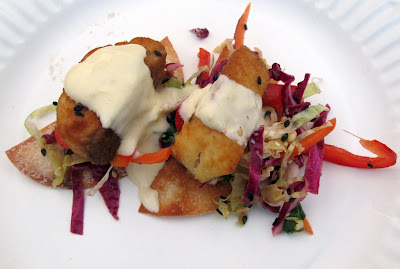 A couple summers back we had a pot luck at the neighborhood pier for an outdoor screening of Jaws. I decided to get bold with the two hours I had to prep, cook, pack and get there. I wanted to make fish tacos, but that was going to call for a lot of food for everyone to have one, and there were going to be plenty of other things there to eat.
So, I decided to make a smaller version - tostada style. Additionally, instead of doing the popular Mexican/Tex-Mex version, I went with an Asian flavor with a wasabi sour cream.

Main Ingredients:
3 lb. tilapia (or any other fish you want to use), cut into 1 x 2 inch strips/chunks
1 pack gyoza wrappings
Spice for the fish (in a bag to toss around):
1 cup flour
2 tsp Chinese 5 spice
2 tsp garlic powder
2 tsp roasted sesame seeds
2 tsp black sesame seeds
2 tsp ginger powder
3 tsp salt
2 tsp white pepper
2 tsp cayenne
Canola oil (for cooking)
Sesame oil (for cooking)
Toss fish chunks in flour-spice mixture and add a few at a time to already hot oil in skillet on medium to medium-high heat. Cook for about 2 minutes on each side, place on brown bag or paper towel to absorb grease.
Cut gyoza rounds in half and place individually to cover baking sheet. Toast in 450*F oven for about 30-45 second or until browning on edges. Keep an eye on these, tho. If the center starts to brown, they will burn real quick. once toasted, dump them out in basket or bowl so they no longer are on the hot baking sheet.
For the Asian cole slaw:
1 small head napa cabbage, shredded
1/2 small head of purple cabbage, shredded
1 red bell pepper, julienned
2 carrots, peeled & julienned
1 small red onion, finely diced
3 scallions (white and green parts), finely cut
In separate bowl whisk:
3 tbsp grated ginger
3 tsp garlic paste
4 tbsp rice wine vinegar (or white vinegar)
2 1/2 tbsp dark brown sugar
1-2 tsp of sambal or sriracha sauce
4-5 tsp sesame oil
1 tsp roasted sesames
1 tsp black sesame
Pour the dressing over the veggies and refrigerate for 30+ minutes.
1 small container of plain sour cream
2-5 tsp wasabi paste, as per your preference
Once everything's made, you can put it out and let everyone make their own. You're done.
Posted by All Is On at 2:29 PM No comments: 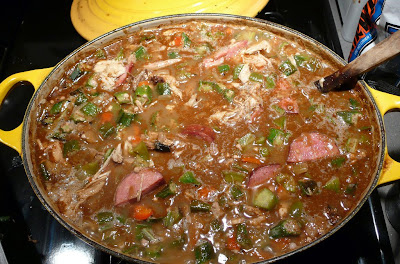 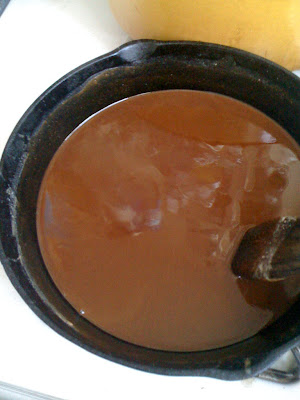 So... I love making gumbo. Love it. I usually make a big batch and feed the neighborhood orphans (aka, my friends). But, in these trying economic times... sorry guys. So, in the spirit of *teach a man to fish,* here's how to do it yourself:

Whatcha need for about 5 qts. of gumbo:

3 bay leaves (again optional... I don't normally use it)

First thing's first. Boil your chicken. Rinse the chicken, then put it in the pot. Fill the water up to top the bird, throw it on the stove and boil it. Well, bring it to a boil, then lower the heat so it simmers pretty hard. Can't rightly say how long... an hour? Hour and a half? Basically, you wanna cook the thing til the legs easily pull off. Take the chicken out and put it in the fridge to cool. Strain the juice into a container (to get the lil bits out), and set aside. You're gunna be using this lovely stock in the gumbo.

While the chicken's cooling, it's time to make your roux. It's up to you to decide how lazy you are and how much flavor you want in your gumbo. The roux decides all of that. Put your oil in the pot and return the pot to a medium fire. After the oil gets hot enough, put the butter in and melt it down. Once melted and stirred together, add the flour, in parts, and start stirring. Keep on stirring at all times, not letting any of the roux sit too long. Basically, you're cooking the flour. The longer you cook, the darker it gets. The darker it gets, the more flavor you get. I say give yourself at least 45 minutes or medium heat slow cooking.

If you have talent, and can do two things at once, while you're doing the roux can also be a good time to saute your okra. A lot of people don't like okra gumbo cuz they're either stupid or crazy. Crazy, cuz it's not truly gumbo without okra; stupid because they don't know how to properly prepare okra to avoid the sliminess, which is basically why they don't like okra in their gumbo. If you saute the okra on a medium-high heat in some oil, the okra *slime* will fry up and brown the okra in a nice crunchy way. Just make sure you don't stop focusing on keeping your roux moving.

After the roux's come to the color you want, throw in the onion, peppers and garlic, and start sauteing them. You can throw celery in there too, if you want. I personally can't stand celery (especially cooked), so I normally don't include it. But there you go. Anyso, saute all these together in the roux til they're soft. Then throw in your okra. Mix all that around. Start adding the chicken stock. I say at least 2 quarts (8 cups), to start. But, as usual, I can't really say how much to measure it. Add you spices: salt, white and black peppers, cayenne, garlic powder and bay leaves. I like to also add the file during the cooking, but some people argue that it's suppose to be at the serving time. Feh. As always with me, put a few dashes (a couple dashes of the cayenne) and see how it tastes. As it cooks, the flavors will come out more, so you can add more as you need.

Bring this to a boil, cover and simmer for about two hours. You may need to add more stock as it cooks down.

While that's cooking, get your chicken out and start pulling and breaking up the meat into chunks. As for the andouille, you have two types: the processed kind you can find in the grocery store, or the real deal smoked andouille, that you really can only get in Louisiana. (I don't care what other people say. Jacob's in La Place is the best - http://www.cajunsausage.com/) Cut em into rounds, halves or quarters. I prefer the quartered so they're bite size and more to go around... but that's just me.

After you've let the gumbo cook for a bit, add your chicken and andouille. Let that cook for another 30 minutes or so. Now... you can either make yourself some rice, and bowl up or you can wait til the next day. I prefer letting it cool and sit over night. Chow down with some nice French bread, and have the file and the hot sauce waiting. 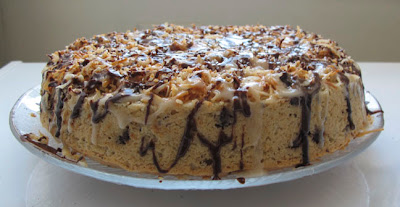 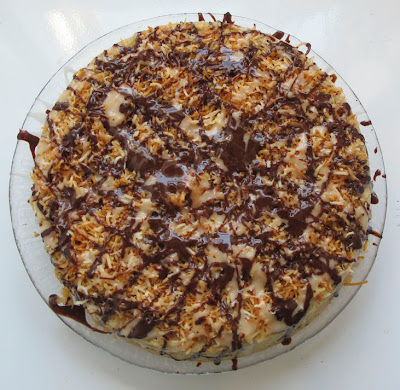 I was assigned to bring dessert to a dinner party, but it's 17 degrees outside, so I wasn't too interested on going out before I had to, and don't really like store bought stuff. So, I thought on what ingredients I had, and boom... decided on this.

The recipe I found online called for the coconut and chocolate to be sprinkled on the top, but I thought that could lead to burning and scorching, so I did it after the fact. Yum!

Double boil - mix and melt the two together in a lass bowl over a pot of simmering water.

Once cake is done, flip/transfer onto plate. Brush glaze on top, sprinkle toasted coconut. Drizzle ganache and glaze all over. 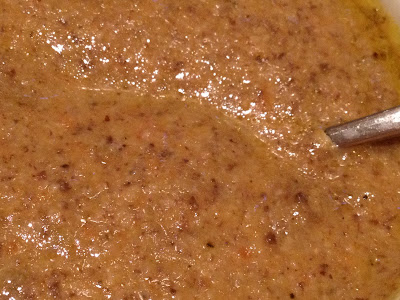 - Prepare foiled baking sheet with olive oil and lay carrots and mushroom caps on. Lightly spray olive oil on all. Roast for 15 minutes.

- While mushrooms and carrots are roasting, on med-low heat caramelize onions and potato, stirring often. (I did it near to the point of the French onion soup caramelization, but you don't have to if you don't want to take that much time.)

- Once roasted and cooled, finely dice carrots and mushrooms. Reserve liquid that formed during roasting.

- When onions/taters have gotten to the level you want them, stir in the roasted liquid, then the carrots. Let carrots saute with onions for 5-10 minutes, then add mushrooms. - Saute all together for 5 minutes, then add stock - just enough to cover the vegetables - as well as thyme, salt & pepper (to taste).

- Using immersion blender (or a regular one in batches), puree vegetables to preferred consistency. (I didn't want mine chunky.)

I let mine simmer a little longer (maybe 10 minutes) before I ate. It is sooooooooo good!!!

You can drizzle a tiny bit of nice olive oil, or have it with some croutons, if you want to add to it. Make this. It's really amazing. 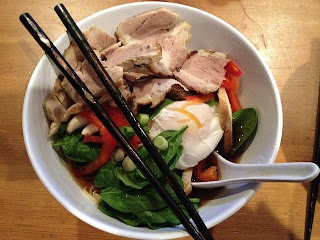 This is three recipes combine for the final dish:

Once the internal temp is 160*F, it's done. Remove and let the meat rest. While that's happening, but the marinade and now juices from the pork on the stove on med-high heat. Scrape off all the lovely bits, then add 3-4 cups of water, for the broth.

If you can get your hands on authentic ramen, do it. They're the best. If not, believe it or not the cheapo Top Ramen doesn't kill the dish, heh.

Toppings can be anything you want, but I went with:
- fresh baby spinach
- red bell pepper
- scallion
- fresh shitake mushroom
- snow pea shoots (much better than munk and alfalfa, in my opinion)
- poached egg
- nori
- silken tofu (extra firm)

Slice the meat semi-thin, add the (already cooked) noodles to the bowl with the broth, then let the eater top as they like.
Posted by All Is On at 12:45 PM No comments: