As your fair city is ever growing, our culture turning to better their own Carbon Footprint (or, at least, everyone should be!) and the price of gas pushing us to find more economical ways of getting around, we are seeing a growing number of bicyclists on the road.
Now, come on people - they have to look out for potholes, cars, doors, and a whole slew of you's... so why not help them out and look out for them as well?

Big argument: Who's the bigger dick? (Is, not has.)

Though they do have less enforcement of the laws of the road than cars do, and some/many tend to break all the laws (although it should be said that even many cars tend to break ‘em as well, particularly NYC drivers), they're still obligated to stop when necessarily, pay attention to their actions and surroundings, and get to their destinations unscathed. Because of their close proximity with moving automobiles, they're already ahead in the attention factors of paying such mind. Pedestrians... not so much.

I don't care what you're doing or who you are - everyone should be paying attention to everything around them and everything they do at all times. But, seeing as pedestrians are not obligated by any law on how to do what they do, I'll take it upon myself to lay down some ground rules.

So, with that, I bring you the second installment of Rules of Walking:

But, since so many people need a bit more explanation and guidance, and since leaving it at that would make this commentary short and kinda dull, I'll give you a few more specific situations that you may wanna keep in mind the next time you're out and about:

2. CROSSWALK CREEPERS
There you are. At the crosswalk. Couple other people there to. Or not. All you know is you wanna get across that road as soon as you can, so you can keep on keepin' on. So, what do you do? You creep out further and further into the street, just waiting for that lil red hand to turn into the lil white guy.
Whoa... look out! That car got pretty damn close, huh?
*Brrring brrring, Move!*
What's his problem?
You! Don't stand out in the crosswalks waiting for your chance to go. Make room for the cars AND the bikes. Whether there’s a bike path or not, bicyclists are sharing the road with the cars, but they’re trying to stay to the side so cars can pass them. If you’re jutting out, they have to get around you and still stay out of the cars’ way.

3. BICYCLE LANE LOLLYGAGGERS
Hanging outside your car waiting for someone, talking on your phone, or maybe just walking up the bike lane cuz the sidewalk's crowded. Listen, they're not there to give you a lil extra standing room or walking space. It's for Bikes. There are far more pedestrians that doddle in the bike lanes than you see bikes riding on the sidewalk. But, if I got every bicyclist to promise not to ride their bikes on your sidewalk, will you promise to not walk in the bike path?

4. DOOR PRIZE!
So, technically you may not necessarily be a pedestrian when it happens, but you're intentions are to move into or out of the act of pedestrianing. Whether you're a driver, a passenger, or hailing, getting in or out of a cab - doesn't make a bit of difference. You’d look out for oncoming cars… why not oncoming bikes too?

If you don't take the time to make sure all areas are clear (including down the block) before opening the door, you're liable to get hurt just as you're liable to hurt a passing cyclist... not to mention wreck the door of an automobile, miss your yoga class or clubbing night cuz you have to deal with a police report and/or ambulance.

5. YAPPERS
Pat your head and rub your belly. Faster. Faster! Now do that while stating the Pledge of Allegiance and jumping up and down on one leg.
Not so easy, now, is it?
Be it by text, cell or with whom you are walking with - if you're yapping away, two to one you ain't paying half the attention you should to what you’re doing, and you can't keep it all straight to avoid a bad situation. Make your movement down the block your #1 priority and all else secondary.

6. DIDN'T YOUR MA TELL YOU TO ALWAYS LOOK BOTH WAYS?
Yeah, they're not suppose to be biking the wrong way up the road, but you aren't suppose to be crossing against the signal or in the middle of the street. So, you're both wrong. But, for the mere fact that you just never know - concern yourself with both directions, even on one way streets. Cars go in reverse... wouldn't wanna step out in front of them because you didn't listen to your Mama.

7. JAY WALKING ACTUALLY IS ILLEGAL, PEOPLE
Hell yeah, I do it. But, I ain't telling anyone to do as I say, not as I do. Wait.. actually, I am. But, I should also follow this rule. And I actually try to. The difference between me and others... I actually and making the effort to pay attention to all the rules I've given you thus far! Look... just make sure you're safe and sound before stepping out in the middle of the street – at a cross walk against a Don’t Walk sign or in the middle of the street. Just cuz there are no cars coming, doesn't mean you're in the clear.

8. STROLLER AGGRESSION
I don't know who's worse, Mamas, Daddys or Nannies. God forbid it's the nanny. I suspect it would probably be the Mama. But, whatever. The point is - would you put your baby between you and an oncoming vehicle? Would you jut your stroller out far enough so it could get smacked by a car? Hell - when in the position of posing a threat to a passing cyclist and your baby, you're on a corner most of the time, anyway! Cars could easily take a tight turn and SMACK! Ooops. Stay all the way up on the sidewalk with your strollers, people. At least for the sake of your baby, if no one else.

Yes, it’s a repeat of the first rule, but I cannot stress it enough – LOOK OUT FOR EVERYTHING PEOPLE!!! You’re the danger, not the cyclists or the cars – YOU! Pay the fuck attention and avoid imposing on others because you’re too self-absorbed to know that there’s a big world around you and you’re lucky to be in it. If I had my way, I would be the police, judge, jury and executioner of anyone who breaks these rules. But… I’m not. So, all I can do is look, and stress to you that you should do the same. 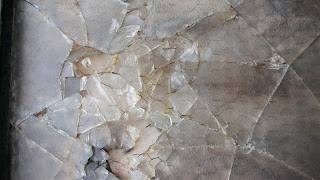 There are these people I know... lots of them, actually... that I normally share one common bind - drinking. Lots and lots of drinking. As of late, however, I have not been so inclined, nor so physically able to do so in the joyous of ceremonies that we together normally subscribe, which is any old damn time and reason to do it. This makes me sad and feel dissected from the life I know so well. At the same time, however, at least I got rid of the belly that was slowly beering out in all directions. Not purdy.

But I don't want. What I do want, other than the wants I want to want, is to have the option to do what I want, instead of what I am able to do, which isn't what I want to do.
Posted by All Is On at 1:24 PM No comments:

I have this absolutely horrible annoying lack of satisfaction that I simply cannot obtain. There's literally nothing I can physically do to change this. If I did... oh the pain it would bring in ever other regard.
To be a bit more specific, so that I can get a bit of sympathy from whoever bothers to read this, and for historical reference of my own life for myself -

Damn it I need to pop my left knee!!! I can feel the deep seeded need to do so, but my muscles are so tight, my knee is aching so much and, quite frankly, I don't have the guts to do it out of pure fear of what it will do to me.

So, I have to just leave it like this and hope it accidentally does it, itself, and it turns out to not be that bad on the rest of me.

So lovely a show it was. So lovely a song it always is.
Posted by All Is On at 4:51 PM No comments:

Poke poke, tickle.
Would prefer a beer.
Trip and fall.
Damn it.
Pick back up.
Hobble around.
Laugh at myself.
And at you.
Fall apart.
Dose up.
Wonder where I am.
Give a go.
Quit fast.
Take a nap.
Want my bike.
And a cookie.
Maybe a cup of soup.
Close my eyes.
Hear a song.
Sing aloud.
Head rearing to commence.
I stop.
Home, to go.
Night, to fall.
Sleep, wake, sleep.
Wake for real.

I made a list of all the things that I didn't want but have and hope to get rid of soon.


You were not on it.