It's all over the NY blogs, but despite, here it is on my own. I have a personal reason for mentioning the news I heard of my freind Bob Guskind death. 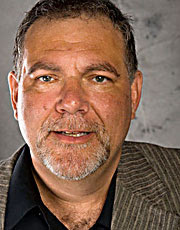 I was a big fan of gowanulounge dot com, which has since been taken down. I was constantly sending my images to the site's photo pool. But then, early fall of 2008, he made his apologies but said he was shutting the site down. It seemed as if all of Brooklyn was upset by this, because he had hundreds of comments wishing him well and hoping he returns soon. Finally, he came back. I emailed him, asking if he needed help with posts.
At the time, it was just days before I was to have knee surgery for an ACL replacement and meniscus repair, so I knew I would be home and with plenty of time on my hands. Within hours he responded with thanks and a post for me to do. That was that... we jumped right into it, and I worked with him nearly every day since.
Through the months of working together, we became friends. We talked about GL, Brooklyn, his life, my life... we confided in each other. He was constantly thanking me and talking about dinner and drinks and talks and... "one day, when we're not so busy."
My boyfriend told me of the news in the middle of the work day on Thursday (3/5). Since then, all I can do is repeat "Bob Guskind" over and over in my head. My mind rereads the conversations we had, the things I learned of him and know of him, the laughs, the woes, the annoyances.
I did not know Bob well, hell I never even had that chance to meet and hang out with him face-to-face. But, I consider him a friend and cannot get this out of my head. He is more than just Gowanus Lounge. He is a voice of Brooklyn, that should be respected.
The Brooklyn Paper's original announcement of his passing (even the "edited" version) is the lowest of the low, the most outrageous example of disrespectful journalism for sensational purposes. Assumptions of his death and exposures of his personal life were published for all the world to read and start the whispering over. Bob did many posts in reference to this site, and this is what they do to repay him. (Of course, now they are posting a new article that shares their respect.)
Whatever the reason (of which it is none of mine to know or say if I do know) the fact of the matter is a lot of people -and entire community- lost a very wonderful, kind person. I don't know why exactly this hits me as hard as it does... but, I miss Bob.
I carry my camera with me every where I go. And nearly every time I shoot something in Brooklyn, I have him and GL in mind. Yesterday, when I was riding home, I didn't even bother pulling my camera out to see what I could get. This fucking sucks.
***Ooops: I mistakenly said it was the Brooklyn Eagle, but in fact it was the Brooklyn Paper. Thanks for pointing it out to me to Xris from the Flatbush Gardener.
Posted by All Is On at 9:00 AM

You may already know this by now, but Gowanus Lounge is back up and running.

It was the Brooklyn Paper, not the Eagle, that gloated over Bob's death.